The Old Town of Corfu, is located in a strategic position at the entrance of the Adriatic Sea, and has its roots in the 8th century BC. The three forts of the town, designed by renowned Venetian engineers, were used for four centuries to defend the maritime trading interests of the Republic of Venice against the Ottoman Empire.

The mainly neoclassical housing stock of the Old Town is partly from the Venetian period, partly of later construction, notably the 19th century. As a fortified Mediterranean port, Corfu’s urban and port ensemble is notable for its high level of integrity and authenticity. 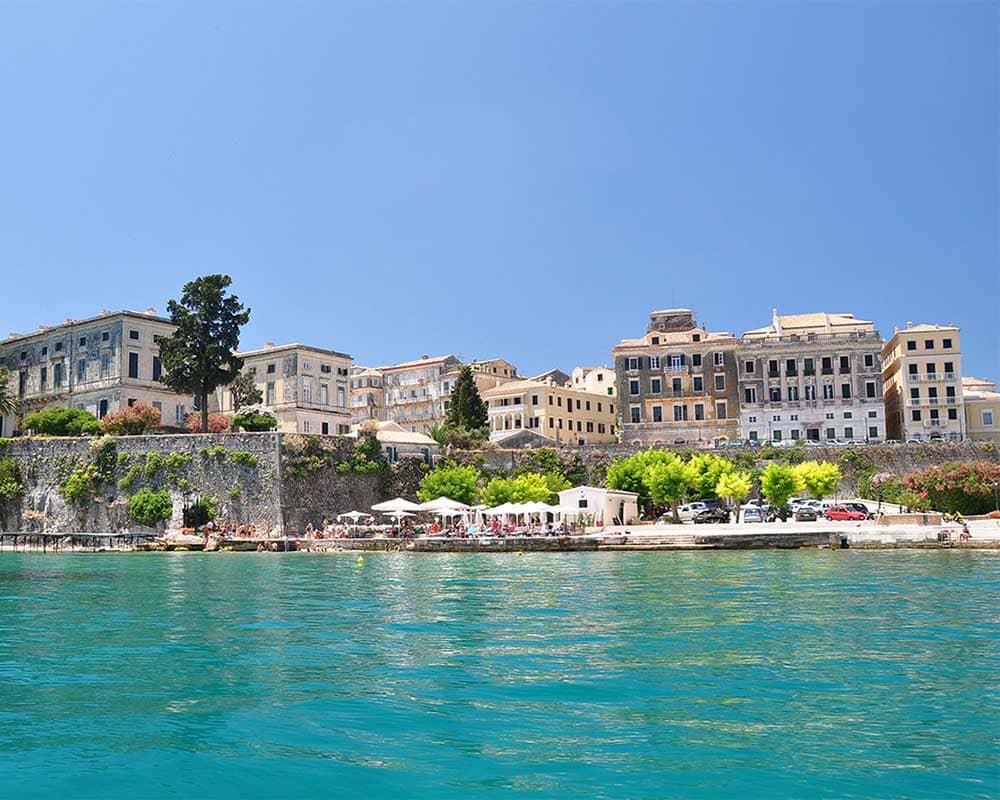 The Old Fortress of Corfu is one of the most impressive fortification works in Europe. It is the first thing to see as the ferry approaches Corfu. It stands on the eastern side of the town, on a rocky peninsula that gets into the sea. This fortress is called Old in contrast to the New Fortress (of Saint Mark), that was also built to protect the town from enemies and pirates.

Mon Repos Palace is situated on top of Analipsis hill, near Kanoni area, in the middle of a beautiful setting full of greenery. It was built in 1826 by the British Commissioner Frederic Adams as a gift to his Corfiot wife, Nina Palatianou. It is a small but very beautiful palace with colonial architectural elements. Later on, the palace became the summer residence of all British governors of Corfu and when the Ionian Islands were united to Greece, in 1864, it was given as a gift to King George I of Greece. 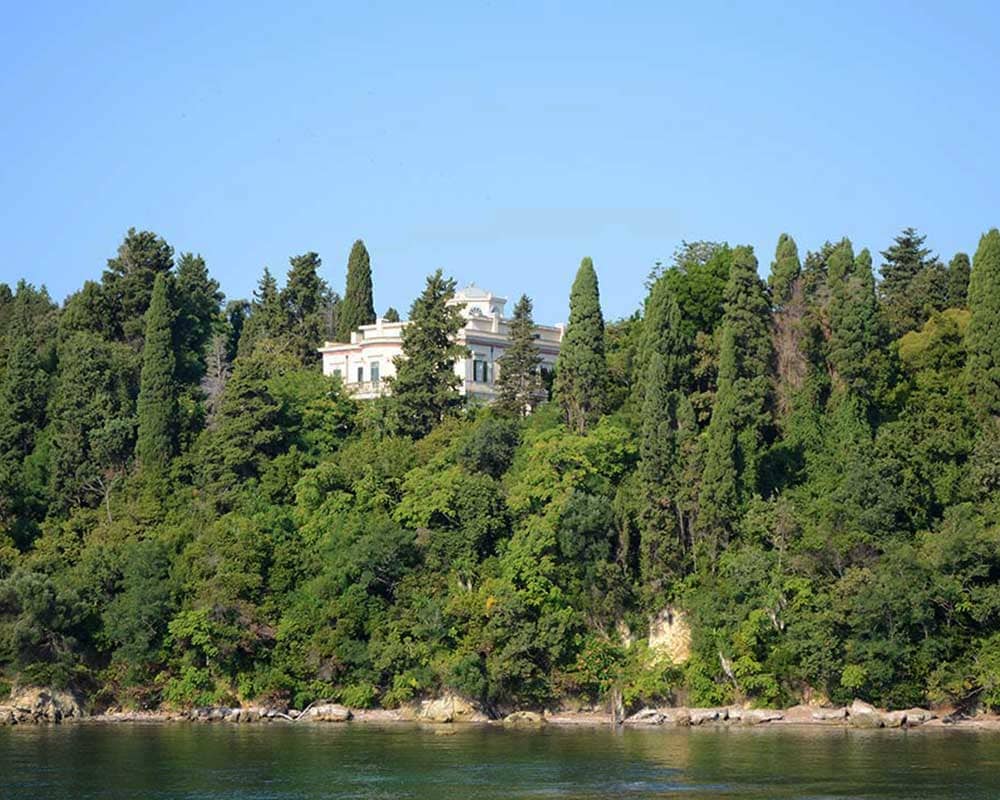 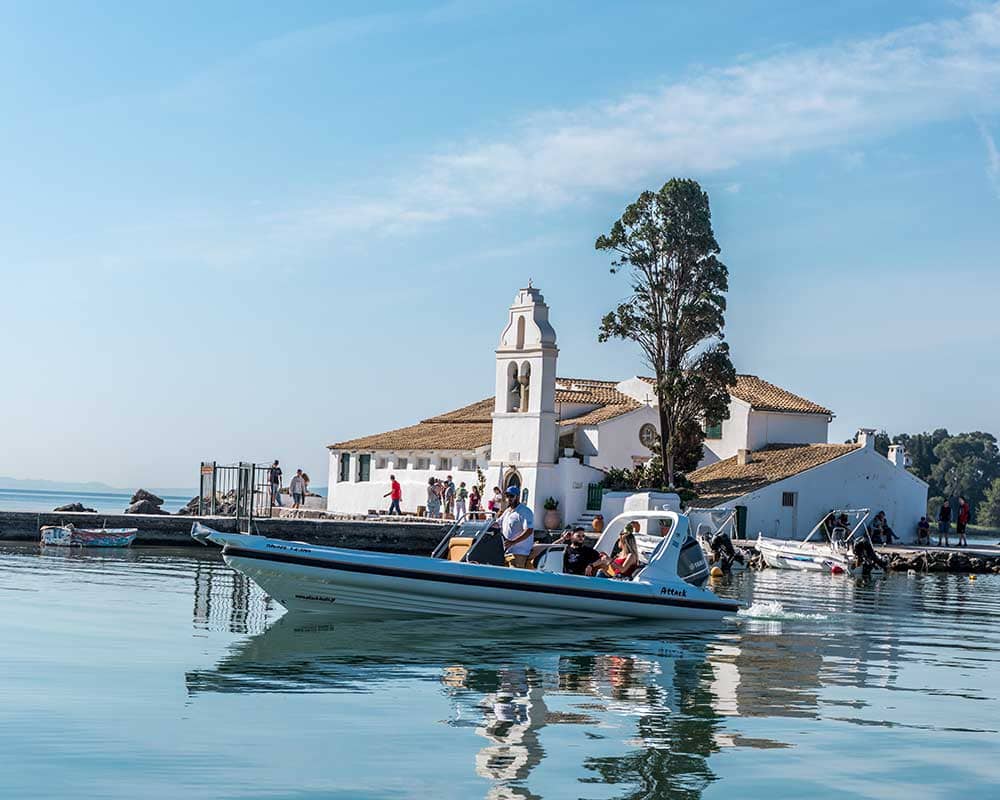 The location of Kanoni with the church of Panagia Vlacherna below and the Mouse Island (Pontikonissi) are the most famous and photographed spots of Corfu. A narrow 300m passage way connects the island with the church of Panagia Vlacherna. Constructed in the 17th century, this lovely chapel has an impressive wooden-carved iconostasis and beautiful frescoes inside. The roof has red tiles and above the gate entrance there is a tall bell tower.

The small, wooded isle of Vidos lies just half a mile from Corfu Town’s Old Port, allowing you to glimpse the historical buildings of the Old Town and St. Spiridon’s church, framed by pine trees and clear blue sea. Known in ancient times as the Island of Hera, sister of Zeus and goddess of marriage, the seemingly tranquil paradise of Vidos has lived through much history. 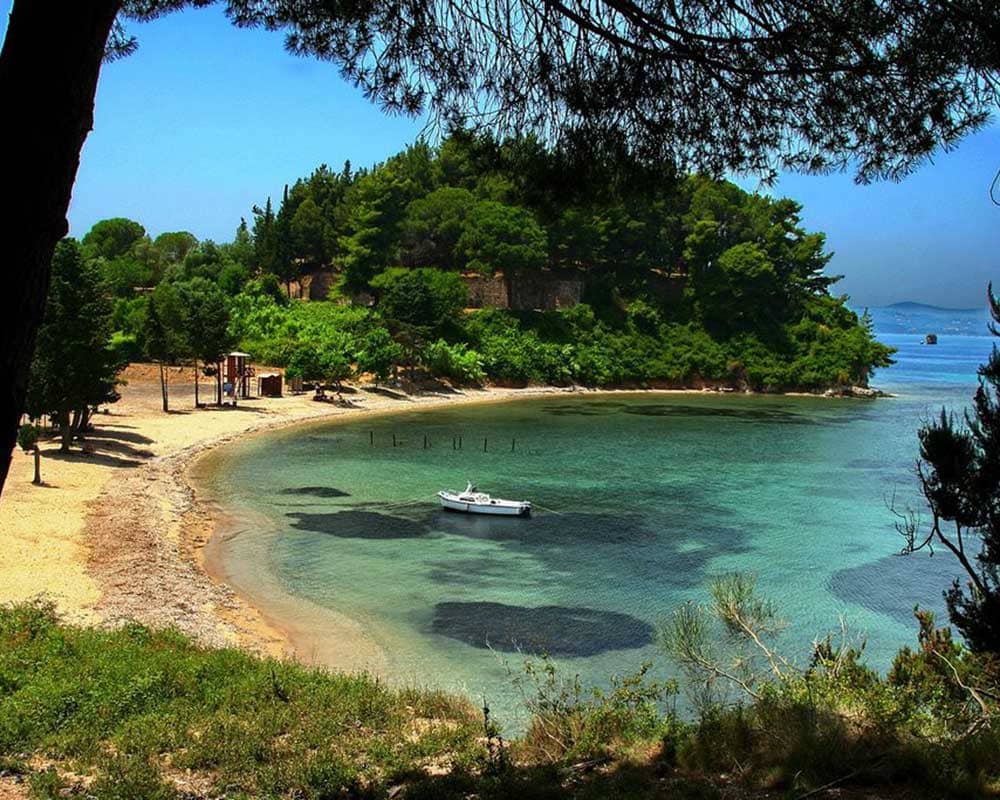 Nissaki is among the most beautiful beaches in Corfu. A lovely sandy shore surrounded by rock formations is ideally located between the villages Barbati and Kassiopi, 22 km north of the main town. This small beach that is situated well away from the road offers only a few tourist facilities.

Nissaki bay is protected from the strong winds, nevertheless the water becomes gradually deep. It is a great place for families while the soft rocks on either side are safe for children activities.

Rent a Rib in Corfu

Agni bay is located 30 km from the main town of Corfu and 11 km of Kassiopi. The petite bay consists of shiny pebbles and a few patches of sand. Wild vegetation and pebbles encircle the beach. The bay has jetties which have been built with the primary motive of offering anchor to the boats that ply from here. The scenic beauty of Agni offers visitors tranquil moments. In close distance from the beach there are three taverns serving famous Corfiot dishes and delicious seafood delicacies. 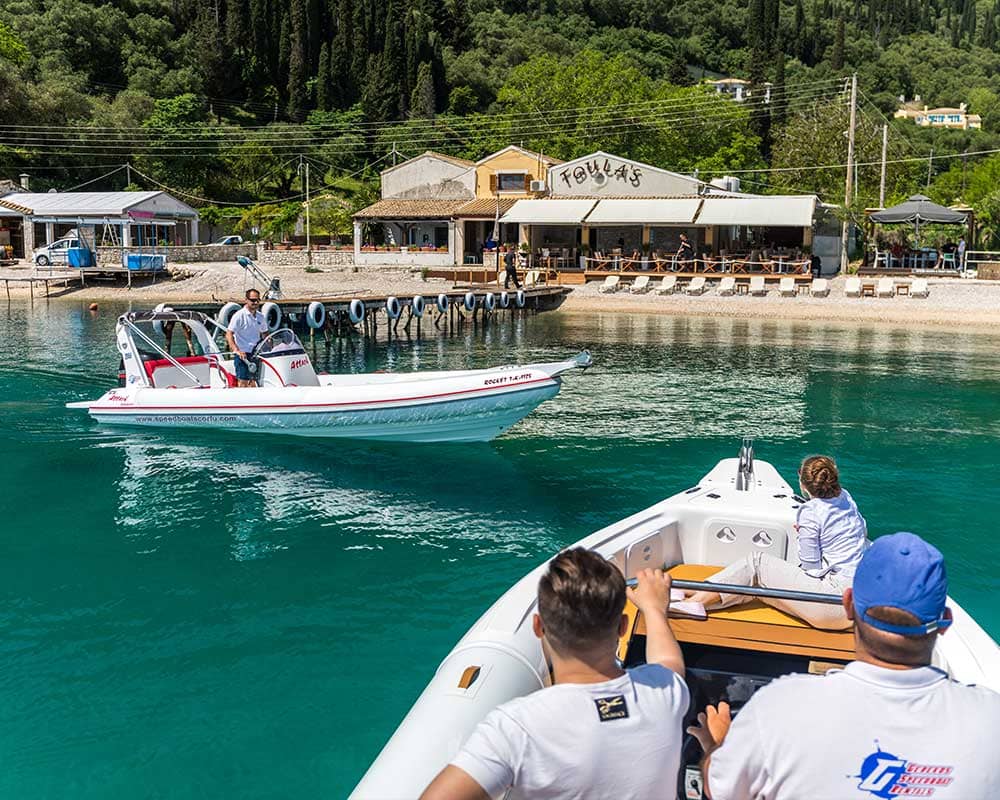 ‘Prospero’s Cell’ Corfu, is the chapel mentioned by Laurence Durrell which is located near Agni beach. Below is a small underwater cave for the more adventurous snorklers and swimmers. That place is excellent for snorkeling tours.

Bataria is a small beach but it distinguishes for its wild beauty and perfect views of the Albanian mountains that make an ideal setting for your summer holidays. Right behind the small port of Kassiopi is the magnificent cove of Bataria, an inviting area with crystal clear waters and shiny pebbles. The crystal beach has rough rocks and vast vegetation creating a relaxing and beautiful spot. The pebbled shore is covered by two rows of sunbeds and on the sides there is some space for those who want some privacy. Despite its close proximity to the village, Bataria keeps a low profile, away from the noisy crowds that one will find in other beaches of Kassiopi. 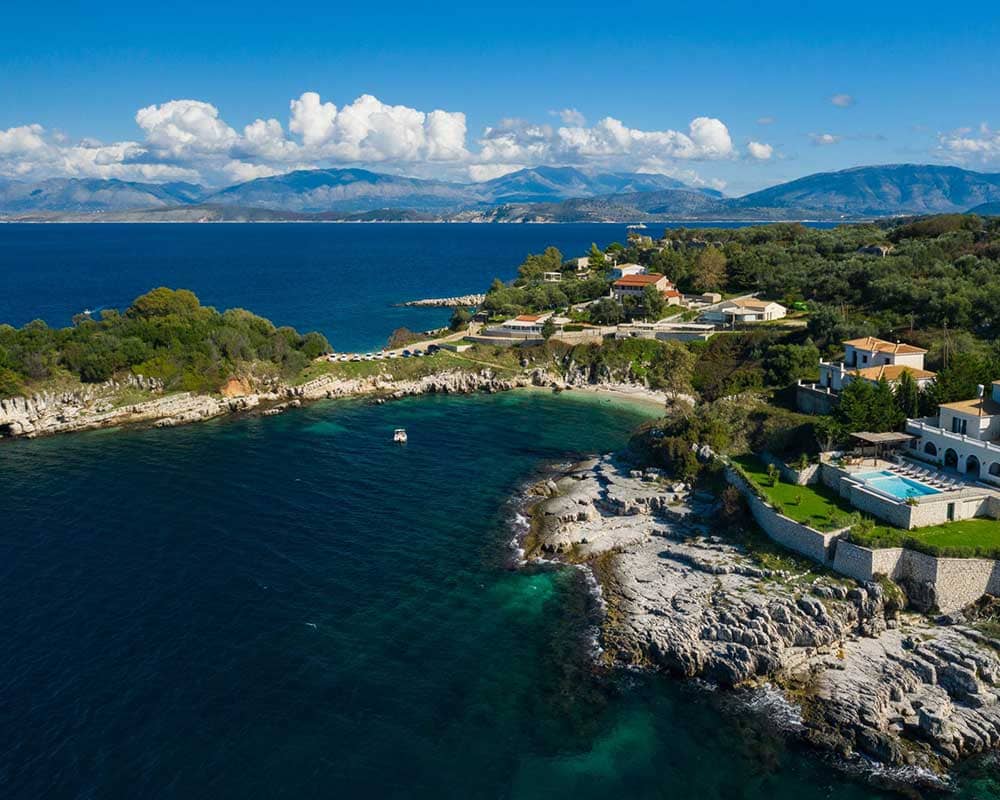 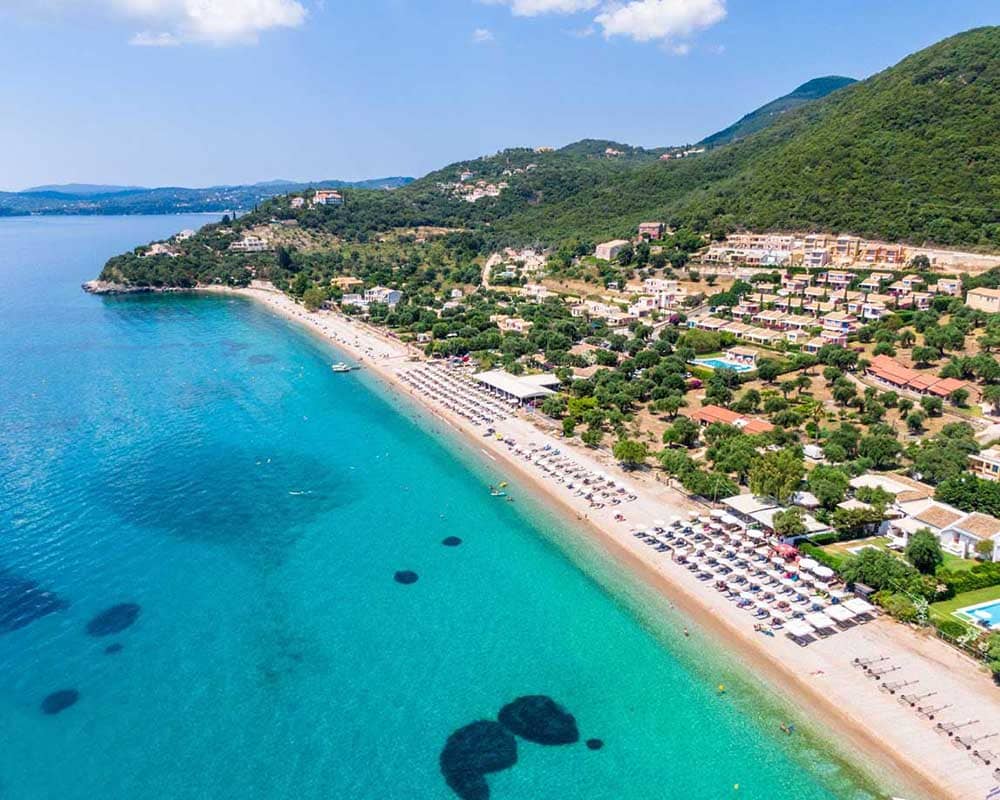 The beautiful coastal settlement of Barbati is situated 17 km north of Corfu Town. It lies around the natural bay, one of the most impressive beaches of Corfu huged by the lush green forests and verdurous hills.
The beach itself is quite inviting for its crystalline waters and the white shiny pebbles. In the past it was actually awarded with the Blue Flag for its cleanness and organization. At the beach you will find plenty of sunbeds and umbrellas.

The Diapontia Islands or Diapontian Islands are a Greek island complex in the Ionian Sea. They are located in the northwest of Corfu, 6 km away from Corfu. The main islands of the archipelago are Othonoi, Ereikoussa and Mathraki. They are the only inhabited islands. The complex includes also the islets and rocks of Diakopo, Diaplo, Karavi, Kastrino, Leipso, Ostrako, Plaka, Plateia and Tracheia. The islands are the most west point in Greece and administratively belong to Corfu regional unit and Corfu municipality. The islands today are a tranquil and serene place for holidays. 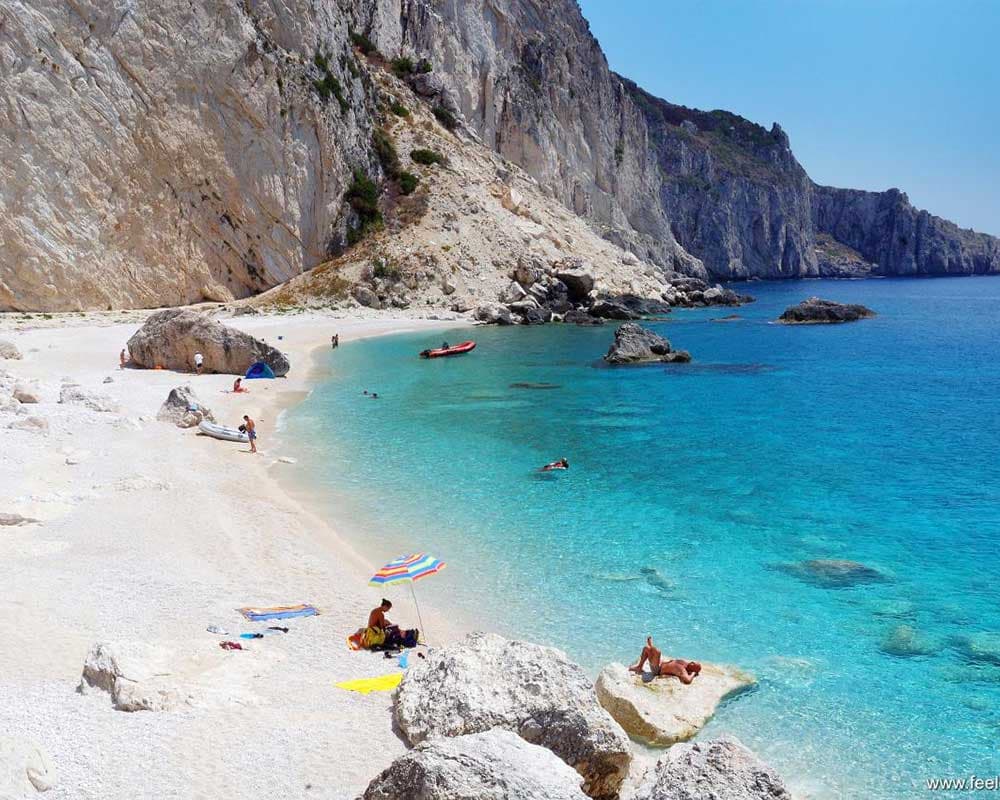 Rent a Rib in Corfu

Paxoi is the smallest island group within the Ionian Islands. The largest islands are Paxos and nearby Antipaxos, which is famous for its wine and two of the finest sandy beaches in the Ionian Sea. Antipaxos is a small island in Greece, about 3 kilometres (2 miles) to the south of Paxos. It is administratively part of the municipality of Paxoi in Corfu regional unit in western Greece. Largely covered in vineyards, Antipaxos has several beaches and one harbour, Agrapidia. It has three main beaches: Vrika, Mesovrika and Voutoumi.

The small port village of Sivota is situated in the northwest coastline of mainland Epirus 22 kilometers away from the International harbor town of Igoumenitsa and opposite lies the south tip of Corfu island, the tip of Asprokavos, separated by a narrow channel of 4 nautical miles. In front of it there are four small isles. The most beautiful of them is the isle of Bella Vraka and the isle of Saint Nicolas. Rent a speed boat from Gerekos Speed Boat Rental Corfu
and explore all these amazing places on your vacation!

We use cookies on our website to give you the most relevant experience by remembering your preferences and repeat visits. By clicking “Accept All”, you consent to the use of ALL the cookies. However, you may visit "Cookie Settings" to provide a controlled consent.
Cookie SettingsAccept All
Manage consent

This website uses cookies to improve your experience while you navigate through the website. Out of these, the cookies that are categorized as necessary are stored on your browser as they are essential for the working of basic functionalities of the website. We also use third-party cookies that help us analyze and understand how you use this website. These cookies will be stored in your browser only with your consent. You also have the option to opt-out of these cookies. But opting out of some of these cookies may affect your browsing experience.
Necessary Always Enabled
Necessary cookies are absolutely essential for the website to function properly. These cookies ensure basic functionalities and security features of the website, anonymously.
Functional
Functional cookies help to perform certain functionalities like sharing the content of the website on social media platforms, collect feedbacks, and other third-party features.
Performance
Performance cookies are used to understand and analyze the key performance indexes of the website which helps in delivering a better user experience for the visitors.
Analytics
Analytical cookies are used to understand how visitors interact with the website. These cookies help provide information on metrics the number of visitors, bounce rate, traffic source, etc.
Advertisement
Advertisement cookies are used to provide visitors with relevant ads and marketing campaigns. These cookies track visitors across websites and collect information to provide customized ads.
Others
Other uncategorized cookies are those that are being analyzed and have not been classified into a category as yet.
SAVE & ACCEPT
Powered by